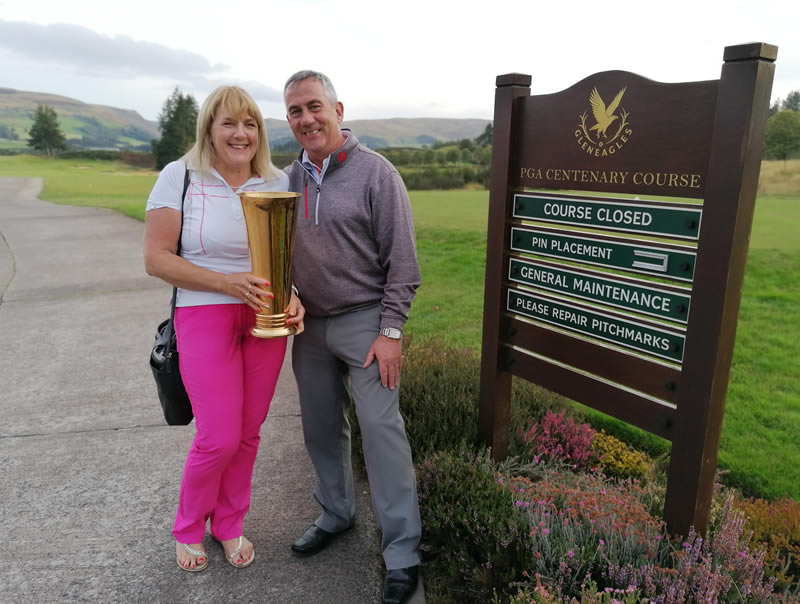 It was a crisp autumn morning in Perthshire and the Legacy Cup was back after a short absence. Since the event’s last staging, Auchterarder and Crieff had joined Blairgowrie and Gleneagles as host venues and a Betterball Stableford format had been introduced. As the pairs assembled they were welcomed with a lovely gift bag courtesy of event sponsors Genius Brewing.

Quickest out of the blocks on Day 1 at Auchterarder were Eddie and Sandra Kerby (Robin Hood) who posted a fantastic score of 44 giving them a comfortable cushion over five other pairs tied in 2nd on 39. The chasers included Stephen Gardiner and Austin Carey (Auchterarder/Glenearn) who put their local knowledge to good use to top the pile in the Gents section.

On to Crieff for Round 2 on Tuesday and we were met with lovely blue skies and sunshine that allowed our pairs to fully appreciate the magnificent surrounding scenery. Stephen and Jenny Wise (West Surrey/Slinfold Park) played some super golf and their best of the day 44 gave them the overall lead at the halfway stage on 82 – one ahead of the Kerby’s.

After a relaxing rest day on Wednesday, our pairs returned to action at Blairgowrie on Thursday with the Rosemount course providing a picturesque test. James and Iona McKean (Cottesmore) won on the day thanks to their impressive 45 point haul, while Eddie and Sandra regained the overall lead courtesy of their 42. Dave Bromley and Mark Sheppey (Lichfield/Forest of Arden) also shot 42 to move them to the top in the Gents Pairs section.

There was a low fog across the Perthshire glens as the sun rose on Friday morning and we made the journey to Gleneagles. It was certainly beautiful to witness, but not ideal for the final round of a golf event. After a short delay, the PGA Centenary course opened and play got underway. The time had come to see who would get their hands on the coveted trophy, with several pairs in with a strong shout.

Eddie and Sandra struggled to replicate their form from earlier in the week and their score of 34 would open the door for others to capitalise. Gary Harvey and Mike Lumsden (Blundells Hill/Duke’s), who were playing alongside the Kerby’s, produced a brilliant 42 to give them the victory in the Gents section.

It was Will & Janet Oldfield (Hurlston Hall), out in the penultimate group, who drew most inspiration from the victorious European Ryder Cup and Solheim Cup teams to score 40 and give them the title courtesy of their 72 hole total of 160. After starting the day in 5th place, Will and Janet were surprised but delighted when given news of their victory and commented “It really has been a great week and we are looking forward to coming back next year”.

Our thanks go to Golf Perthshire for asking us to organise the event and to Genius Brewing for being our headline sponsors. A big thank you also to the host golf clubs and the pairs who part – we look forward to seeing you all next autumn to do it all again.

After 3 fantastic days on the Moray Firth, our #LinksCupPairs Inverness drew to a close at @CastleStuart today. Well done to our winning pair Gary Martin & John O’Neil, and a big thank you to our 3 host courses and competitors for their support 🏆 pic.twitter.com/9HZJCelEdx